To celebrate Harvest, this year our church collected food for the local Food Bank at St Leonard’s Church and money was donated to Operation Christian Child. In addition, we had a fundraising evening at which a local duo, George and Tom Cook (known as Bak 2 Bak), came to provide us with an evening of music.

The evening was called ‘The Pub Comes to Church’, and as you can see, everyone had a really good evening dancing the night away to great music.

£700 was raised during the evening and the money was divided between OCC, the Food Bank and the church. At harvest-time, sharing helps Christians to remember that all good gifts come from God. Giving is a way of saying thank you to God in a practical way whilst remembering that he commanded all people to love and care for others.

Thank you to everyone who supported Harvest this year. 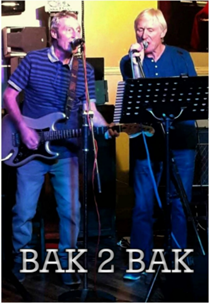 At St John & St James we have two war memorials for those in the parish who lost their lives during the first and second world wars. One of the memorials is made of wood, and when we moved into our new building two years ago, we had it restored. However, the names were not very clear to read and so earlier this year we launched an appeal to have the lettering refurbished with gold paint. 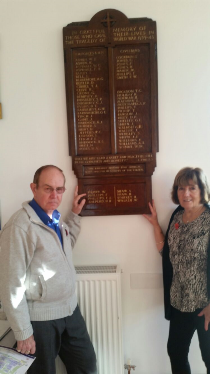 During our Remembrance Service on the 12th November we were able to unveil the restored memorial. Not only did we raise enough to pay for the restoration, but we were also able to give a donation of £120 to the British Legion.

Thank you so much to everyone who gave money to get this work done and thank you to all those who gave their lives so that we could live in freedom today.

In July 2016 we had a Barn Dance and everyone had a great time, when music and tuition was provided by the Canty Band. They will be providing the entertainment again. To remind you, this is what we wrote after our last Barn Dance:

Now that we have raised the funds for creating the Centre we are turning our attention to putting on activities to raise funds for activities at the centre. For example; in July we had a Barn Dance to raise money for a dishwasher to support the work of the Community Lunch. A great time was had by all as about 100 people gathered for a Ceilidh/barn dance held at the Centre in July.

The music was provided by the superb Canty Band and from the first dance to the last the hall floor was packed with people having a great time with lots of fun and laughter.

Prizes were awarded for best dancers and best dressed barn dancer. It was a brilliant evening and the feedback from those who attended was really positive.

Many thanks to the Canty Band for providing such wonderful musical accompaniment throughout the evening and also to the St John and St James Community Volunteers for organising the evening.

We have a wonderful group of Volunteers who help to organise fund raising events for activities at our Centre.

In September we had a Quiz Night, which raised £368 to support our Monday morning Parent and Toddler Group “Squashie Play”. We are very grateful to John Waugh for donating an MOT and a car service for auction which helped to boost the amount raised from raffle ticket sales.

In October we had a Sing Along to the film Grease, which raised £102 to help fund our Community Choir, which meets on a Wednesday nights.

Our latest evening was a Murder Mystery, to raise funds for ‘The Jolly Soap Opera Mob’. This is the name that a group of young adults, with learning disabilities, have called their group. They meet on a Monday evening at the Centre, to make new friends and enjoy a range of activities and outings.

They have been learning new skills, such as Drama, Baking and Arts and Crafts, however, they also need to have other activities at the Centre. They said that they would like to have a multi use Activity Table so that they could compete in American style pool, air hockey and table tennis.

There were 80 people who came along to play detective at The Murder Mystery evening, when they had to decide ‘who killed Humpty Dumpty’. The event raised the £450 to buy the table.

A very big thank you to The Arts Team from Old Roan Baptist Church, who put on this performance for us. They provided their own scenery, costumes and even table decorations. We really hope that they are able to put on another event for us in the future.